A Personal Retrospective Look at WAP

A version of this article appears in the September/October 2014 issue of Home Energy Magazine.
SHARE
Click here to read more articles about The Back Porch

During the energy crisis of the 1970s, Congress realized that low-income households were particularly vulnerable to the rapidly increasing and fluctuating oil prices; they lived in homes that were energy inefficient, but were least able to afford to make energy efficiency improvements. So Congress decided to provide some relief by passing legislation for a Weatherization Assistance Program (WAP).

I started my WAP career as a crew supervisor/trainer in 1979 at a small nonprofit in West Virginia after a few years working for a general contractor and doing some remodeling work on my own. I provided on-the-job training while working on homes four days a week. I became a trainer/monitor for the West Virginia WAP office in 1981. During those early years, the sense of purpose and common cause led to a very strong bond and camaraderie among our staff. When, during the Reagan years, our funding was questionable, we started saying goodbye to each other and promising to keep in touch. But Congress kept funding WAP, and our staff stayed intact for many more years, with a few of us still hard at it.

Bob Scott
is currently the director of energy services for the National Association for State Community Services Programs (NASCSP).

Most of the focus was on the outside of the house in those early years. Blown attic insulation was always a high-priority measure, but we did not yet fully understand the importance of air sealing the attic floor before insulating. Installing storm windows was routine; typically the final part of each job. Outside caulk was applied by the case—I’ll bet many older readers will recall caulking between clapboards to reduce air infiltration. We even thought it worked.

The biggest technological change in WAP’s evolution came with the introduction of the blower door. For the first time, we could measure and locate air leaks. But perhaps even more important, the blower door gave us a better understanding of how buildings work. We began to think of a house as a system, and to take a whole-house approach to optimize building performance for our clients.

As we implemented blower door technology, we got very good at air sealing, and we quickly learned that this could affect the home’s indoor air quality. So digital combustion analyzers to test combustion safety and efficiency became an essential part of the tool kit. And health and safety became an integral part of our work. 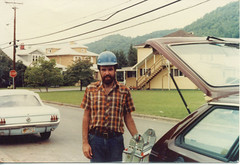 Our author in his early days working with WAP in West Virginia, helping make homes in the state more energy efficient and comfortable, and healthier to live in. (WV WAP)

WAP has continued to evolve into a sophisticated, state-of-the-art technical program. It has created a market for high-quality materials and specialized tools—which in turn has stimulated supply-chain businesses to provide them. Many home performance professionals get their start with WAP, and the consistent funding of the program has enabled WAP to advance technology, training resources, and best practices for the entire home performance industry.

Today’s WAP is implementing the DOE Quality Work Plan, an aggressive and comprehensive blueprint to ensure top-quality work in all WAP retrofits, and to set a high standard for the home performance industry. Implementation of the Quality Work Plan poses a huge challenge to WAP operators, but I bet that five years from now it will be seen as another step in the continual evolution of the Weatherization program. While federal funding remains uncertain, it looks now that pre-Recovery Act levels are achievable. Many WAP grantees and local agencies have partnerships with utilities that supplement the federal funding—in some cases, with much more funding.

I’m in the sunset of my WAP career. I can reflect on the past 35 years knowing that we made a big difference in the lives of many, many low-income households, and that we helped an industry to grow and develop. But mostly I think about WAP’s greatest resource—the people in the network. Their creativity, hard work, expertise, and commitment to the cause built the program and will ensure its continued success.