A version of this article appears in the May/June 2015 issue of Home Energy Magazine.
SHARE
Click here to read more articles about Single Family

Below is a dialogue, conducted over time, between Doug Garrett and Moldy In Marin. The topic came up in the office because we received several questions from online readers about an article, “Beware the Closed Bedroom Door,” available at homeenergy.org for free. (Click on the link or look for it in the drop down menu for Home Performance, under Healthy Homes, and Indoor Air Quality.) This dialogue represents one such letter.

Moldy In Marin: I opened my bedroom closet recently and found to my horror that the back corner was moldy. After throwing away five pairs of boots and shoes and taking bleach to the walls and floors, I decided to keep the door open permanently. I'm thinking as much light and airflow as possible can only help. I also purchased DampRid, a moisture-absorbing product.

Doug Garrett: I’ve seen moldy shoes, dresses, belts and the like in many closets over the years. The reasons for keeping bedroom and other doors open is to facilitate the free flow of the air back to the furnace or the air conditioner. Often closets don’t have a supply register in them, so this isn’t an issue. That’s why it wasn’t dealt with in that article. Now having said that, when closets don’t have supply registers, they can become colder or more humid than the rest of the house, and in those cases condensation can occur and we become fungi farmers! So leave the closet doors open or put a very small supply duct into the closet and leave the door closed. The 20–40 CFM of airflow will have no trouble exiting under the closed door, and your clothes will stay fresh and clean.

Don’t waste any more money on DampRid. It can only absorb a small amount of water vapor, and it is not reusable once it has done that. One other thing to know: Keeping plastic shopping bags against the wall or on a floor where they create an interior vapor barrier can also lead to mold. I once saw a closet with a very interesting pattern of mold on the walls. It looked for all the world like the Manhattan skyline! I couldn’t figure it out until I looked across the bedroom and saw a cluster of Macy’s shopping bags. I asked the lady of the house if those had been stored in this closet and she said, “Yes, I moved them to make your job easier.” I put the bags into the closet as they had been previously, and their height and width matched the pattern of mold on the walls perfectly. I’ve even seen the plastic bags that dry cleaning comes home in do the same thing. 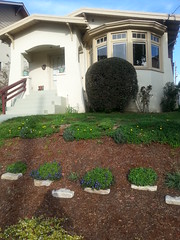 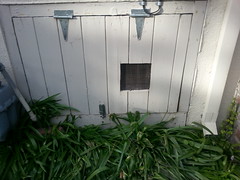 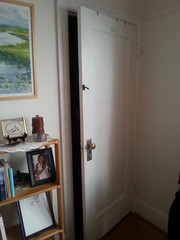 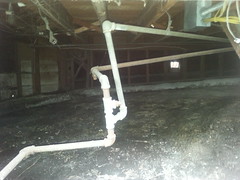 Before the vapor barrier was applied to the crawlspace. 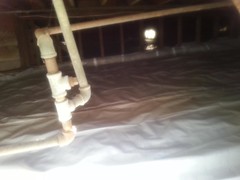 After the vapor barrier was installed.

MIM: I want to update you on my closet, because I thought you might find my news interesting. I never bought more DampRid, but I left one set up in back of my closet with the closet door open and everything else removed from the floor. A few days after the DampRid was opened and put in there, I checked to make sure no new mold had grown. I discovered that the DampRid container held several inches of water! I emptied it and returned it to the same spot and have now emptied it two more times. Each time it's collected at least another 1/2 cup of water! Obviously we have a problem, and we'll have to figure out why it's so wet!

DG: Is your home built on a pier-and-beam foundation? If so, that is most likely the source of your moisture. If not, then we will have to dig deeper. To be honest, the amount of water you are describing isn’t a lot. With the door open, the DampRid was able to absorb water from throughout your house. Remember: Water vapor always distributes itself evenly across the whole volume of air within the space. So it was in effect dehumidifying your whole house, not just the closet. If you are not having any moisture-related issues in other areas of your home, I think that you can permanently solve your problem by allowing your closet to interact with the rest of the house so that the moisture is distributed evenly and there are no physically isolated pockets where it can accumulate to harmful levels. You could do this by increasing the undercut of the door, or installing a small louver in the door, or (and this just occurred to me) by installing a jump duct. I would try increasing the undercut to 1 inch above the floor or carpet.

MIM: I don't know what kind of construction the house has, although that sounds feasible to me, as there is a crawl space under the whole house. There is another place in our home, on the same side of the house (but all the way on the opposite corner of the house), where another inside wall got moldy. This happened the same week the closet got mold. I guess they must be related. We were gone over the holidays and came back to the mold issues. A person did come in once in a while to care for plants. Might the airflow in the house have altered enough with us gone for one week to have caused the mold? If I continue to keep my closet door ajar, will that be enough so the landlord doesn't have to make installations or incur costs?

I thought it was a lot of water for the DampRid to absorb, not understanding that it was dehumidifying the whole house! So I thought we must have a serious water concern somewhere. like a leaky pipe or something.

DG: Well, there’s your problem, as the old saying goes. Homes with crawl spaces are built on pier-and-beam (vertical support posts topped by horizontal support beams that support the house) foundations. More to the point, they are known to be the source of lots of moisture! A family of four creates about 4–6 gallons of water vapor per day by bathing, cooking, and breathing in their home. To that amount, the evaporation from even apparently dry soil under the house adds 12 gallons per day for every 1,000 square feet of soil! So if you have a 2,000-ft2 crawl space, and a home with a moisture problem, the biggest and most probable source of excess moisture is that 24 gallons per day rising up from the crawl space, not the 4 gallons per day you are making! In building science, we always address the source of the problem, not the symptoms. The source of the offending moisture is the crawl space soil, so that is where we aim our efforts first.

What can be done? Ask your landlord to go to a hardware store and buy a roll of 6-mil polyethylene (I always select an opaque white plastic, since it creates a clean, bright final product) and cover the dirt in your crawl space with it. Overlap the sheets by 2 feet and tape them. Tape the plastic to all of the piers, too. To make it a fully conditioned space, your landlord would also need to seal off all of the foundation vents, insulate the foundation wall with an inch or two of rigid foil-faced (for the required fire code rating) foam insulation, and then add 20 CFM of conditioned air to the space via small duct or install a small dehumidifier. You live in a relatively mild climate zone (the San Francisco Bay Area) and one that isn’t extremely humid. I would suggest that your landlord do this retrofit in stages. First cover the dirt with the plastic, but leave the vents open and the foundation wall uninsulated. Do you now have insulation under the floor? If so, leave it for now. That should do the trick, and it won’t cost any more than a decent meal for two.

At Pure Energy, we are finding more and more IAQ problems caused by pollutants that are supposed to be outside the living space, but are being drawn into the living space by unbalanced house pressures.

Q. Home performance contracting is new to us at our residential heating and cooling company in the Northeast. We are trying to do best by our customers as we learn on the go. One issue ...