How Solar Decathletes Communicate and What We Can Learn from Them

A version of this article appears in the March/April 2016 issue of Home Energy Magazine.
SHARE
Click here to read more articles about The Back Porch

DOE’s Solar Decathlon is a challenge posed to collegiate teams to design, build, and operate solar-powered houses that are cost-effective, energy efficient, and attractive. The 2015 competition took place October 8–18 at the Orange County Great Park in Irvine, California, and consisted of 14 U.S. and international teams.

The Solar Decathlon consists of ten contests designed to gauge how well the houses perform and how livable and affordable they are. Each contest is worth a maximum of 100 points, for a competition total of 1,000 points.

Home Energy readers and the participating decathletes are trying to teach the public about the value of energy efficiency and whole-home performance, which is not an easy task. Some teams addressed the public, as opposed to tradespeople or the sponsors that had made their projects a reality, while other teams took the same approach regardless of their audience. “The ideas behind Indigo Pine [the name of Clemson University’s Decathlon home] translate to a variety of platforms and allow us to maintain a consistent message,” says Neely Leslie, a graduate student in the Masters of Architecture program at Clemson as well as the public relations coordinator for their project. “The support we received from sponsors and the general public derived from a common belief in our end goal: to challenge the construction methods of traditional residential design.” 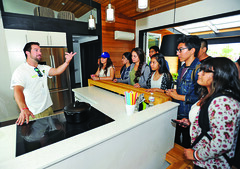 “For example,” says A.J. Elliott, a graduate student in the Product Architecture Engineering program at Stevens and the lead of the team’s communications and electrical engineering crews, “if we were talking to the general public, we would say, ‘The SURE House utilizes twice as much insulation as a regular home and is wrapped with a membrane to be ten times more airtight, both of which help us reach 90% less energy use than an average New Jersey home.’ But if we were talking to a sponsor, we would say, ‘The SURE House has R-50 mineral wool insulation in our ceiling, R-40 in our walls, and R-30 in the floors. The home is also wrapped in a vapor-permeable air membrane enabling it to be ten times more airtight than a traditional home.’”

All of the decathletes who participated in the Solar Decathlon have a passion for sharing ideas about what works and what can work to make our homes more efficient and resilient to climate change. Their communication strategies are also ones that can be used in our industry at large: tailoring effective messages based upon our audience.

In order to convince mainstream America that energy efficiency should be a prime consideration in choosing a home, we’ll need to look at the generation that follows us. “Millennials have been exposed to technology since birth and are therefore more likely to accept new technologies as answers to energy production,” says Leslie.

“Younger generations will absolutely be more likely to adopt residential energy efficiency. First off, they've grown up in a world where climate change is possibly the biggest problem facing society. And second, the cost of efficiency will be equivalent to, if not cheaper than, the alternative,” says Elliott.