BY JOSEPH PETERSEN and SARAH WIDDER
WEB ONLY

This online-only article is a supplement to the Spring 2017 print edition of Home Energy Magazine.
SHARE
Click here to read more articles about Windows

Improving the insulation, solar heat gain, and infiltration characteristics of windows can significantly improve overall thermal performance by reducing heat transfer through the window and by decreasing air leakage into and out of a home. As approximately 43% of existing homes (~50 million houses) still have low-performing, single-pane clear-glass windows, and millions of other homes have only double-pane clear-glass windows, improving window performance can also save a lot of energy.

Today, various energy-saving window retrofit solutions are available to homeowners, ranging from window shades and storm windows to highly insulating triple-pane R-5 window replacements. Many of these technologies have been evaluated in the field, in the Lab Homes at Pacific Northwest National Laboratory (PNNL), and through modeling to prove their cost-effectiveness and performance in different climate regions. The resulting data are used to increase market penetration of these efficient technologies.

Recently, for example, PNNL’s Regional Technical Forum approved a utility measure for low-e storm windows based on such data. This was a watershed moment for increasing fenestration options in utility programs—especially low-income programs. This article will review the most recent field test and discuss future rating efforts. For the complete study, including a review of past research and full references to previous work, as well as detailed descriptions of window technologies, window testing, and efforts to support window retrofits and show their cost-effectiveness, see “learn more” at the end of the article. 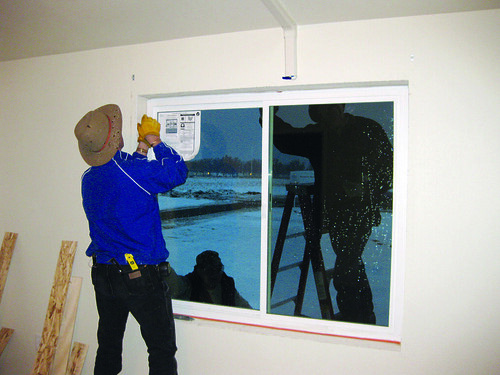 Jeld-Wen installers air seal the highly insulating window so that the most accurate data will be gained from the experiment. (Courtesy of Pacific Northwest National Laboratory)

The experiments described below were conducted in the PNNL side-by-side Lab Homes, which form a platform for precisely evaluating energy-saving and grid-responsive technologies in a controlled environment. The PNNL Lab Homes are two factory-built homes installed on the PNNL campus in Richland, Washington. Each Lab Home has seven windows and two sliding glass doors, for a window-to-floor area of 13.7%. To be representative of the Pacific Northwest climate, clear double-pane windows were installed as the baseline technology for both PNNL Lab Homes. For the primary experiments examined in this study, the “experimental home” was retrofitted with the fenestration technology under evaluation, while a matching “baseline home” remained unaltered. The floor plan of the Lab Homes as constructed is shown in Figure 1. The Lab Homes are meant to represent typical Pacific Northwest housing stock and include R-11 cavity insulation and R-22 floor and ceiling insulation. However, the building shell is relatively tight (~3.2 ACH50) due to the capabilities of the manufactured housing fabrication process.

The metering approach includes metering and HVAC system control activities taking place at the electrical panel. Heat transfer through the primary glass and window fenestration will be aggregated by differing temperature sensors. For all experiments, metering was completed using Campbell Scientific data loggers and matching sensors. Two Campbell data loggers were installed in each home, one allocated to electrical measurements and one to temperature and other data collection. Data from all sensors were collected via cellular modems that were individually connected to each of the loggers. All data were captured at one-minute intervals by the data loggers. The one-minute data were averaged over hourly and daily time intervals to afford different analyses. Occupancy in the homes was simulated via a programmable commercial lighting breaker panel (one panel per home), using motorized breakers. These breakers were programmed to activate connected loads on schedules to simulate human occupancy by introducing heat to the space. 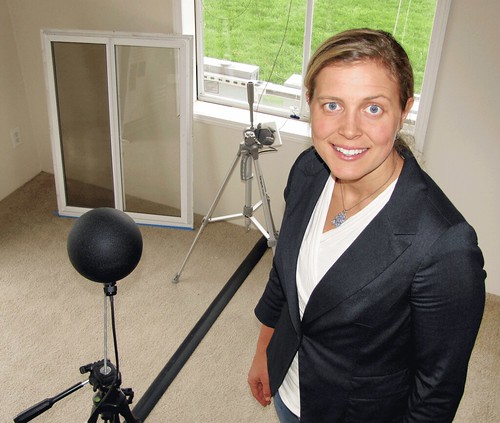 One of the authors, Sarah Widder, pictured in one of the lab homes. (Courtesy of Pacific Northwest National Laboratory) 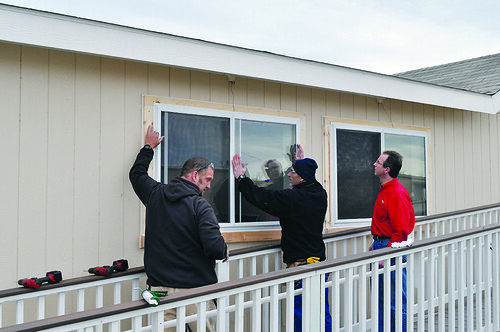 The average annual energy savings calculated from the measured PNNL Lab Homes data for the interior and exterior low-e storm window evaluations are summarized in Table 1.These savings are compared to the average annual HVAC energy savings, 12.2 ±1.3%, estimated from primary window replacement with highly insulating R-5 windows. Generating annual savings estimates for the individual technologies is done through simple heating-and-cooling degree- day calculations coupled with the experimental savings shown for each season. Details of this process can be found in the research papers highlighted in the “learn more” section. 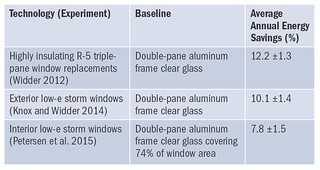 PNNL evaluated cellular shades in the PNNL Lab Homes during the 201516 heating and cooling seasons. The technology examined as part of this study was the Hunter Douglas Duette Architella Trielle honeycomb fabric shade, which is made with six layers of fabric, including two opaque layers and five insulating air pockets. The inclusion of insulating air pockets as well as the layer of metallized Mylar that lines the air pockets, minimizes conductive and radiant heat transfer and effectively increases the R-value of the fabric.

These cellular shades were also equipped with the Hunter Douglas Green (HD Green) automated scheduling technology, which allowed researchers to evaluate both the thermal improvement attributable to the shades and the impact of automated shading devices on the optimal management of solar gains. To independently evaluate the functionality of the shades and the associated automation schedules, as well as their collective performance, PNNL tested the cellular shades in comparison with three other baseline technologies—no window attachments, vinyl blinds operated per the HD Green schedule, and vinyl blinds that remained closed. The results of the tests are shown in Table 2.

Because the data presented in Table 2 are preliminary results, the savings have not been annualized over the heating and cooling seasons. Insulating values associated with cellular shades alone resulted in a reduction in total HVAC system load of 10.5–16.6% when compared to standard vinyl blinds, as shown in the static-operation experiment. The implementation of the HD Green schedule as shown in the optimum-operation comparison experiment, resulted in savings of 15.3 – 16.6%. The addition of automated insulating shades to a home with no window attachments at all resulted in achievable savings—14.4 – 14.8%.

Studies conducted at the PNNL Lab Homes have demonstrated the energy savings potential of low-e storm windows and cellular shades with automated scheduling. Additional studies have modeled the cost-effectiveness of these technologies, making them a compelling retrofit option for homes, including multifamily buildings. The addition of energy ratings and labels for window attachment programs should help consumers, designers, and home performance contractors make informed decisions about window retrofit options. Current data prove the energy-saving potential and cost-effectiveness of most window attachment technologies. Further utility incentives and market transformation efforts will encourage builders to adopt these technologies—which is the next step to saving some of vast amount of energy we lose through our windows each year.

On a mission to help people make homes more energy efficient? So are we. Indow sells and installs interior window inserts in homes that help homeowners stay warmer in the winter and cooler in ...